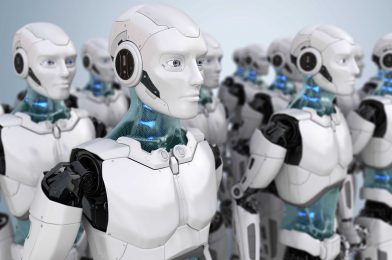 It seemed like a fun project. Think of the exciting possibilities. In 1959 Arthur Samuel wanted to teach his computer to play checkers. At the time getting a computer to do anything required the programmer to tell it in excruciating detail exactly what to do in every situation. The inherent problem with this method, besides being laborious and time consuming, is that the computer will never be able to do anything that the programmer doesn’t know how to do. Then Arthur decided to let two computers play each other and learn from each other. He’s since been known as the father of machine learning.

1997 – Computers can win. World chess champ Garry Kasparov is beaten at his own game by IBM’s Deep Blue.

2005 – Computers can drive. Stanley beats twenty-two other robot vehicles on a demanding 132-mile desert course. Congress funded the competition to support its directive that one-third of U.S. military ground vehicles be unmanned by 2015.

No longer limited to mundane tasks on a factory floor, deep learning combined with mobility enables computers to walk, talk, learn and do things that were once relegated to the world of science fiction.

2012 – Computers can watch video. Google develops a network of 16,000 Internet-linked computers that learn to identify cats by browsing millions of random YouTube videos.

2014 – Computers can create. University of Montreal doctoral student Ian Goodfellow invents the General Adversarial Network, or GAN. Computers are no longer limited to what humans can feed it. Now they can feed each other data it creates.

This Person Does Not Exist (Computer Generated Faces)

2020 – Computers are necessary. For years businesses that replaced workers with machines were demonized. The great shutdown triggering the great reset has given businesses cover under the umbrella of safety to use machines. Now it’s practically a moral imperative. Jobs that can’t go remote are now open season for deep learning robots to “save the day”.

80% of jobs in the developed world are in services. Jobs that deep learning can now perform. Are you ready?